THEY'VE been dealt brutal blows over the years — with horror injuries to show for it — but some of the world's most famous UFC stars enjoy a very different life out of the ring, with super glam wives and girlfriends by their sides.

While some have settled down with childhood sweethearts, others have met their partner through the sport itself — with a few dating former ring girls and some even finding love with fellow fighters.

And while it's the fighters themselves who have made a name for themselves, many of their partners have since built up huge social media followings in their own right too.

From Conor McGregor and Tony Ferguson, to Tito Ortiz and Brock Lesnar, many of big names can now be seen chilling at home, sharing a kiss with their partner and enjoying luxury holidays online.

Here's a look at the beauties that have been supporting the world's biggest UFC stars over the years...

The pair first got together in 2006 and Ortiz was forced to defend the relationship on The Howard Stern Show at the time, insisting their relationship was monogamous and they'd met after Jenna had left the adult film industry.

They welcomed twins Jesse Jameson and Journey Jette together, before a nasty split in 2013 — with Ortiz being awarded sole custody of the kids.

Ortiz also has a son from his first marriage to ex wife Kristin.

He has since moved on with girlfriend and former UFC ring girl Amber Nichole Miller, who he was friends with for years before they began their relationship.

She often shares photos of them on Instagram together, but the majority of photos are dedicated to modelling shoots and very daring bikini snaps, as she shows off her incredible figure to her 83,000 followers.

The couple moved to Australia together several years ago and welcomed a daughter there in 2016.

"So I appreciate those things more than anything."

Like her colleagues, Kristie isn't afraid to show off her killer body on Instagram and has shared a stream of photos with her fans over the years — with everything from bikini snaps to romantic photos with her husband.

He's become a household name, but by Conor McGregor's side throughout his fighting career has been partner Dee Devlin.

The 31-year-old star and his Irish stunner girlfriend have been together over nine years and have two kids, Conor Jack and Croia.

Dee, 32, is McGregor's number one fan and even quit her job to be able to support him by travelling with him.

The UFC champ then hired her as an official member of his team, putting her in charge of his finances.

In November 2017, he told the Irish Mirror: "My girlfriend worked very hard throughout the years and stuck by me when I had essentially nothing.

“For me to be able to take her out of work, give her everything she’s ever wanted and to travel the world with, fills me with pride.”

Dee regularly shares loved up photos with her other half on Instagram, sharing passionate kisses, posing in stunning dresses ringside and enjoying luxury holidays together.

MMA star Tony Ferguson, 36, married wife Cristina in 2012, and she's been by his side throughout his incredible MMA career.

However, unlike some of her fellow UFC partners, she has kept a relatively low profile in the limelight.

He previously revealed that she's his "biggest support system" however, as he continues to put his body on the line in the Octagon.

And he's quite the romantic, signing off each of his Instagram captions with "XT" — thought to be a nod to his other half.

The star regularly shares photos on social media of them cuddled up together, and recently posted a selfie from in hospital following his brutal defeat to Justin Gaethje with the caption: "Love You Babygirl Thanks For Taking Care Of Me."

Cristina, who shares one son — Armand — with her husband, hit the headlines last year when she filed a restraining order against him.

Ferguson was never arrested, nor was he charged with a crime and Cristina did not file for divorce.

She alleged that Ferguson's behaviour was non-violent, but out of character.

Her statement from March 2019 read: "Tony Ferguson is a good husband and good father to our son."

MMA star Henry Cejudo, 33, has fallen head over heels for stunning Brazilian model girlfriend Amanda Dallago Chaves — and given the amount of loved up photos they've been sharing, they look to be in it for the long haul.

Amanda, who according to Fab Wags is daughter of Olympic black belt jiu-jitsu fighter Nise Dallago, has built up quite the social media following during their relationship and often shares smoking hot photos in skimpy bikinis on the beach, or proudly modelling the Brazilian flag.

The pair are often pictured on beautiful holidays together too, and Amanda, who is a professional contortionist, regularly shows off her moves in impressive photos.

Cejudo, who is the former UFC flyweight champion and current UFC bantamweight champion, even let his girlfriend borrow his belts for a sunny snap as they holidayed together previously.

It's unknown exactly when the pair began dating, but they began sharing snaps together at the end of last year.

Former UFC Heavyweight Champion Frank Mir, 40, has long credited his beloved with Jennifer with helping him through one of the toughest points of his life — when he was injured in a motorbike accident in 2004, months after winning his first UFC heavyweight title.

He was out of action for a year and only truly returned to his former self in 2007.

At one point, the fighter was ready to retire, but according to Fox Sports, Jennifer refused to let him and simply told him: "You only have to answer to your children... Look how they would see you right now. Could you explain it to them?"

It was enough to inspire his subsequent return to the top of the UFC.

“I want to thank my wife for keeping me on my path,” Mir previously said, according to The Telegraph.

The pair met while they were both working at the Spearmint Rhino club in Las Vegas.

They went on to marry in 2004 and have three kids together, while Mir has also adopted Jennifer's son from a previous marriage.

Perhaps one of the sweetest couples of the lot is former UFC Middleweight Champion Anderson Silva, 45, and his wife Dayane.

They are both from Brazil and have three sons and two daughters together.

Dayane doesn't have a huge social media presence, but shares the odd photo with her husband along with a few stunning modelling photos.

It's clear the pair have found a happy balance between celebrity life and cosy family time, with photos showing them cuddled up together with their friends and dogs at home, while more show they still enjoy the odd luxury holiday too.

The notoriously private Beast Incarnate, aka Brock Lesnar, 42, caused a storm when he tied the knot with former WWE star Sable – who is 10 years his senior – in 2006.

American model Sable, 52, proved to be one of the stars of the Attitude Era in the 90s, a decade before Brock became the face of Ruthless Aggression.

Sable – real name Rena Marlette Lesnar – is now retired and living with the ex-UFC heavyweight champion on a farm in Maryfield with their two sons, Turk and Duke.

Current and two-time undisputed UFC Light Heavyweight Champion Jon Jones, 32, met his partner Jessie at school and despite attending different colleges, their relationship stayed strong from there — with the pair getting engaged in 2013.

The pair never confirmed a wedding date, but he has previously referred to Jessie as his "wife" — and he has always credited her with keeping him grounded.

He previously told MMA Hot Stuff: “This sport can turn you into somewhat of a celebrity. Leaving my parents’ home and going into this sport could really confuse a young fighter.

"But being with Jessie it keeps things in check for me. It doesn’t get to my head, and I live the life of an older man. It keeps me in the house and grounded. Jessie is definitely a huge percentage of my success.”

The pair have three daughters together, Leah, Carmen, and Olivia Haven.

Actor and former MMA star Randy Couture, 56, was previously married to Kim Couture, before they split up in 2009. 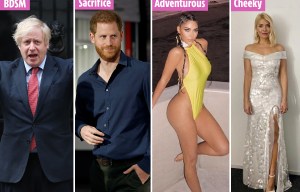 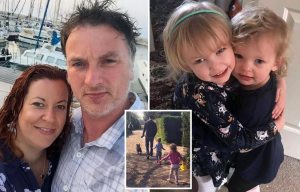 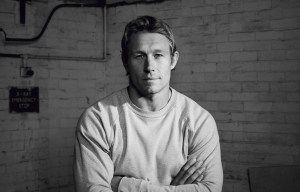 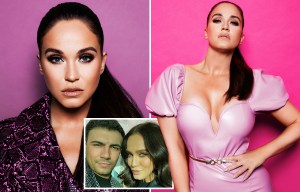 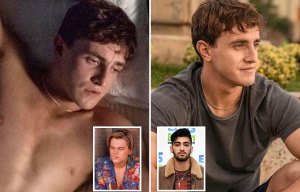 Normal People fans are going wild for Connell's chain… so why is it so hot? 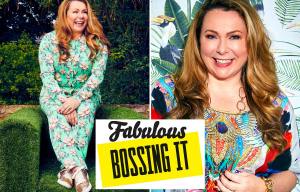 However, the pair remained on good terms and he continued to coach her own MMA career.

He has since moved on with long-term partner, model and actress Mindy Robinson.

The pair often work on movies together, including Range 15, while Mindy is known for her appearances on shows like Take Me Out, King of the Nerds, Millionaire Matchmaker, as well as an appearance in the music video Sexy and I Know It.

PSG can buy Milinkovic-Savic and Marusic from Lazio for 80 million euros
Niang is Interesting for Tottenham, but the move to Marseille is more real
Coutinho's agent: Philippe has a desire to return to the Premier League, but there have also been conversations with Bayern about next season
Bayern President on Sanaa: he plays in Nike cleats. If he goes to us, he will learn about the advantages of adidas
Ighalo's agent confirmed that Manchester United are close to extending the player's loan until January
Celtic can sign Claudio Bravo, foster or Joe HART
Harry Kane: Tottenham must win 7-8 games to qualify for the Champions League
Source https://www.thesun.co.uk/sport/11614530/meet-ufc-wags-mma-ex-porn-star-ring-girl-bikini-model/

UK’s 2metre rule must be ditched to save the economy, ex-Chancellor Lord Lamont warns

Use ‘common sense’ to prevent a second wave of coronavirus, Brits are urged

West Lothain police appealing for information after house broken into

NHS doctor's warning for parents sending their children back to school

10 things you still aren't allowed to do under lockdown rules

Flat-earthers mocked after SpaceX launch shows Earth is round

Charity shops will be very different when they reopen after lockdown

Appeal for missing man from Brent

Primark could reopen Scottish stores by 'late June' after lockdown

New rules in place as charity shops prepare to reopen

Piers Morgan's coughing causes alarm as he returns to GMB

All the Ikea branches opening today with new shopping rules

Primark unveils plans for sales as £1.5bn unsold stock built up during lockdown

Coronation Street will return to filming next week, says ITV

When are all McDonald's opening? Latest on drive thrus and the new limited menu

Finding a moment to reflect

Will you be fined for not sending your child to school?

As lockdown eases today, here are the baffling BBQ rules of what you can and can’t do at a friend’s garden party

Everything we know about the return of the Championship

Alan Shearer quips that Kylian Mbappe would be perfect for NUFC

Supermarkets are urgently recalling these products over safety fears

Independent Newport businesses you can support in lockdown

Minister insists lockdown is being eased in a cautious way

Social distancing and queue bubbles - The Broadway from June 15

CAUGHT: Crooks swipe goods worth £4k after smashing through roof of Paisley shop

Piers Morgan accuses Dominic Cummings of 'taking us all for mugs'

Coronavirus LIVE updates: All you need to know as lockdown measures ease in UK

All of the shops and services that are reopening on Monday