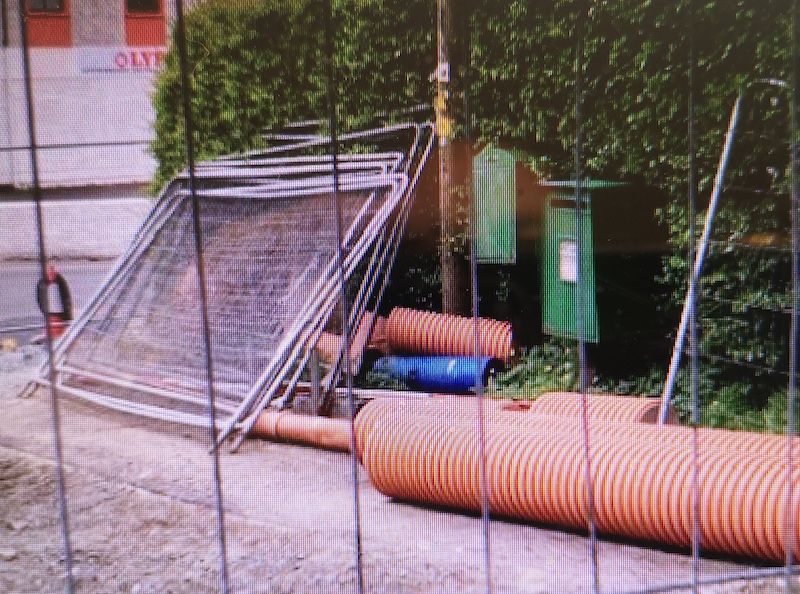 A county councillor has hit out at Irish Water after they blocked off a postbox which is used by many locals in Letterkenny.

Cllr. Jimmy Kavanagh says that residents are expressing annoyance that a post box in the New Line Road area has been fenced off and is inaccessible due to work taking place on the footpath.

The post box is used by many elderly residents in the area and they have been expressing frustration that the post box is now inaccessible.

Cllr Kavanagh said “I was contacted today by a lady from College Farm Road who was very annoyed that the post box was sealed off and she was worried that a letter she had managed to get posted there, would not have been collected by the postal service.”

Cllr Kavanagh has spoken to An Post and they have assured him that collections are still being made from this box, although it is highly unlikely anything will be posted there until the fence is removed and the work completed.

He added “Older and vulnerable people should be aware that as part of their service during COVID-19 An Post are providing a service whereby the postman/woman can take any mail that they have for free and post it for them, the postal delivery service will apply a postage mark at the local mail centre, and then proceed to deliver the mail to the recipient.

“If an elderly person has a mail item they need collecting they can put a sign in their window saying “I have mail” and the postal delivery staff will collect it on their route.”

He said this should help overcome the problem of the sealed-off post box at New Line Road, at least for the elderly and vulnerable.

The final of the Hungarian Cup showed what will happen if you now launch fans into the stands
Higuain injured a thigh muscle in training
💛Borussia Dortmund players got down on one knee, forming a heart: For a tolerant world!
Diego Costa was fined 543 thousand euros for non-payment of taxes. He avoided 6 months in prison
Premier League managers have approved the rule of 5 substitutions per match
If you read this text to the end, you will know more about the game De Bruyne Pep
Marcelo: the Real Madrid Mentality to win in the finals. We always want more
Source https://www.donegaldaily.com/2020/05/15/irish-water-stamp-out-delivery-service-with-blocked-postbox/

Three arrested after 'largest drug seizure ever made' in Northern Ireland

Limerick cycle campaign urges people to have their say on strategy

Varadkar: 'Racism too is a virus... We don't need to look across the Atlantic to find racism'

Sunniest spring on record in Dublin with rainfall 70% below average

Prolific thief and addict jailed for stealing blades in Limerick

O’Doherty and Waters must pay legal costs of case against State over Covid-19 laws, judge rules

Colin Farrell has ups and downs during COVID-19 lockdown, like us all

BREAKING: Search for a president for University of Limerick to begin in autumn; process of appointment likely to take over a year

#HelpDonegalGrow campaign wants to hear from you

Tyrone midwife on cover of British Vogue: 'I imagine my mum will be in Tesco buying all the copies she can'

Staff of Special School step up to mammoth 4,500km challenge

Poll: Have you been curbed your water use after the hosepipe ban warnings?

'Maurice was my favourite footballer, I'm in awe of the man and I played with him'

Ireland has higher per capita death ratio than US, study finds

Coronavirus: Ireland has higher per capita death ratio than US, study finds

Man in his 40s dies in Cork road crash

Virus spread slows in Galway before next easing of restrictions

'Racism is the knee on our neck, making it hard to breathe'

Return to foreign travel will be ‘sluggish and protracted’

Donegal Rector embarks on prayer cycle with a difference

Debunked: No, Italy hasn't discovered that Covid-19 is a bacterium rather than a virus

Connacht wield the axe as a dozen players depart the Sportsground

Timber craftsman Ruddy on a winner with his superior sticks

Locked up in luxury for the rest of the lockdown

European recovery plan is worth billions to Ireland

'We can't just pause our emotions': Protest organiser not deterred by calls to stop event due to Covid-19

A Cuppa for the Soul by ‘two wise ladies’

Academic freedom is under pressure in Irish universities

Strict rules on queuing as Dublin shops prepare to reopen

President expresses ‘greatest heartbreak’ at clashes with protesters in US

How to get one dance step ahead of Covid-19

All pupils will not be able to return to class at same time, INTO warns